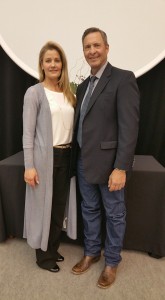 28 years ago the then 27-year-old ice hockey goaltender, of the Buffalo Sabres, suffered one of the most gruesome injuries ever seen in professional sport.

His throat cut by a stray skate, he survived thanks to his team’s trainer reaching into his neck to pinch shut the severed artery that would later need 300 stitches.

The traumatic accident led to a spiral of nightmares, insomnia, chronic depression and alcoholism. He tried to kill himself, with the bullet from the attempt still lodged next to his right eye, and only now feels he can cope with his demons thanks to the love of his wife Joanie.

Malarchuk was playing for Buffalo Sabres in the NHL against St Louis Blues, when the freak accident left him fighting for his life.

On January 20, 2017, I had the opportunity of speaking with Joanie Malarchuk, for our Bell Let’s Talk campaign. Joanie was speaking on the perspective of a loved one living with mental illness.