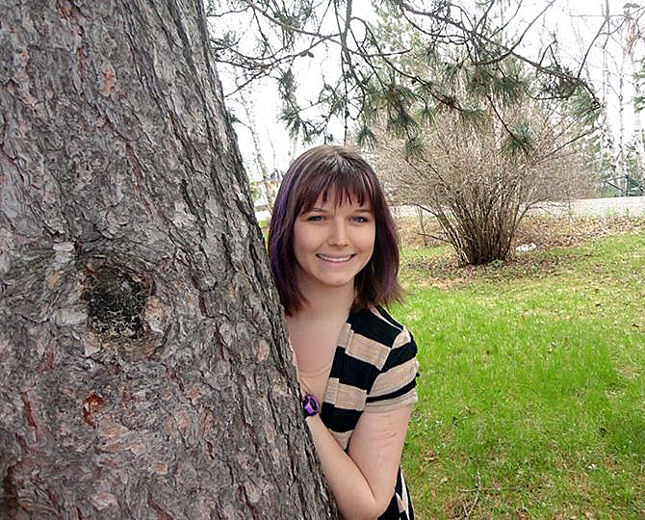 She does take medication for the mental disorder that’s dogged her since her early teens, and she still receives — albeit, less lately — medical assistance.

But things appear to be coming together for the Sault Ste. Marie woman, 21, for whom mental illness has been a constant companion for far too long.

“I haven’t been in the hospital for about four months,” Cutler told The Sault Star this week. “I’ve been doing very well.

“I just decided that it was enough. I wanted to be happy. So I found the strength that I have inside of me and I just worked really hard to find the happiness. I do more in the community, hanging out with friends. I do more stuff to keep myself going.”

Indeed. Cutler is easing back into her beloved dancing, harbours solid hope of soon enrolling in a personal support worker program and recently moved into her own apartment.

This improved state appears a far cry from the condition in which Cutler found herself in early 2014 following two weeks of shock treatment sessions in Sudbury, that didn’t appear, at the time, to be effective.

“My memory did improve a little bit,” she said at the time. “It’s still a little bit down. I still have a lot of anxiety, but things will slowly get better, I think.”

One thing is for certain: young adulthood has been anything but kind to Cutler.

The Sault Star began documenting the Sudbury native’s plight in 2011 when the ambitious young dancer tumbled down the stairs at her dance studio after sustaining an atonic seizure. She had been diagnosed shortly before with epilepsy and had, previously, passed out. But the latter episode, which sent her to hospital with severe facial bruises, would end her association with Studio Dance Arts, a place she loved dearly.

Hospitalizations followed both here and in London, Ont., for seizures and stomach problems, as well as treatment for what Cutler described as “major depressive disorder and anxiety.”

Then, late last year, a Star story told of how Cutler attempted to overdose at her Sault Ste. Marie apartment. A relative was notified something was wrong, and the young woman was discovered unconscious and taken to hospital.

She stayed there until she was sent to Sudbury. Upon returning, she remained at Sault Area Hospital for about five weeks, where doctors adjusted her medication and pumped up her vitamin intake. Then, she began living with her step-father and receiving additional care from other family members, including an aunt and uncle in the city.

“I think (treatment) helped a little bit, but I really, truly believe if you want to get better from depression, you have to work really hard and you have to do a lot of the work yourself,” Cutler says now. “It’s possible. I’m not saying it’s not possible but, definitely, not something that will happen overnight.”

Although eligible for Ontario Disability Support Program payments, Cutler said she is determined to follow through on not only becoming a PSW, but, eventually, a registered nurse. And not necessarily because she was always overwhelmed by the care she received.

“I’ve actually been treated poorly a couple of times and I told myself I want to be a nurse that is not like that and I want to help people,” she said.

“With all the experiences I’ve been through, I really want to be the type of nurse that will never give up on a patient, no matter what their health status is.”

Despite the fact hospitals have not always held all the answers for her, Cutler encourages anyone with symptoms of depression to see a medical specialist, the sooner the better.

“I think for a lot of people, (mental disorders) start off probably in high school,” she said. “And, if you don’t get treatment fast for it or work hard, then it drags along with you … and I think that’s what happened with me. Like when I found out I couldn’t dance anymore, I just didn’t do anything. I didn’t even want to get better.”

Cutler is easing back into the craft, involved in an upcoming production of Pippin, set to be staged early in the new year.

“At first it was tiring, but as I get to be doing more rehearsals, I think it will come back because my motivation is just so strong right now that it will help me.”

Seizures still happen, but are kept under control. Keeping in good company has also aided Cutler’s quest for wellness.

“I was just tired of being depressed and I was hanging around very negative people and it wasn’t a positive lifestyle,” she said. “I was watching TV shows and I would see people who were so happy, doing what they love and they were just much happier.

“Being depressed is not a way to live. It’s very tiring.”