Fighting the War at Home 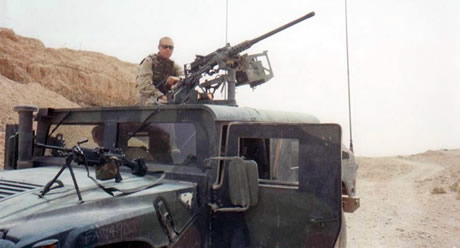 A soldier returns safely after surviving sniper fire and roadside bombs in Iraq and Afghanistan. But the hypervigilance and suppressed emotions that kept him alive have taken a heavy toll.

I came home from Iraq in March 2004, yet I’m still fighting a war, a war here at home. It’s a war of shadows, one that no one seems to really understand. A war of anger and anxiety, fought in the recesses of my mind.

Just like in the two wars I fought in Iraq and Afghanistan, I don’t know who the enemy is. There, insurgents take potshots at you, then go back into hiding. Combating post-traumatic stress disorder, PTSD, is the same. Some days I feel as if I have the enemy on the run; other days it has me pinned down.

I am a former military policeman. I was among the first soldiers to move into Afghanistan after the Sept. 11 attacks. For nine months, my company provided support for Rangers and special operations forces. We returned home in September 2002. Four months later, in January 2003, we were in Kuwait preparing for another war.

I remember the day we moved into Iraq. It was about a week after D-Day. As soon as we crossed the border, we saw cratered highways, dead bodies and burning vehicles.

For the next year, my company provided security for main supply routes and patrolled the streets of Mosul. There was never a firefight, just constant, low-level violence. Sniper fire, RPGs, IEDs and mortar attacks kept us on edge at every moment. We were hypervigilant. We couldn’t shut it off. It reached the point when we thought that anything could be a bomb, that anything on the road could blow up.

Now, the war is on my home front. I often ask myself, why am I still fighting? I’m safe now, aren’t I? But PTSD, like an insurgency, is elusive. It attacks from all angles, almost invisibly. The enemy is out there, but you don’t know when or from where an attack will come.

As a soldier, I saw things no one ever should. I once responded to a call from a field artillery unit that had shot an Iraqi who tried to flee a checkpoint. Have you ever seen what a .50-caliber round does to a person’s head? Imagine a large wooden mallet smashing a watermelon. The .50-cal. does the same. Brain matter was splattered all over the inside of the Iraqi’s truck. At the time, I didn’t feel anything. I felt numb. It was as if nothing had happened. No emotion at all.

In war, you learn to shut out such horror. It’s called “survival mode.” Your mind and body go numb. You don’t recoil from the horror; instead, you make jokes about it. Now, back home, I am still in survival mode. I block my memories by keeping a busy life. I’ll work 10- to 12-hour days, and attend college classes one to four nights a week. I do this because it helps me forget, it helps me shut out my war. But it’s still with me. My war’s always with me.

For six years, I trained to be strong and to follow orders. I was trained to fight and to kill. I was trained to be a robot. That is the Army way. You are not to think, nor to ask questions. If you were to look at a unit going to war, you would see what I once was: Stone-cold fighting machines, programmed to take orders and to survive. Nothing fazed me.

That changed in January 2004, just a few weeks before we returned home. My squad was providing convoy security for a military VIP when an ear-shattering explosion rocked our Humvee and the vehicle behind us. The IED’s shock wave threw me against my door, the stench of burning flesh and blood filled the cab. I looked over to my driver and asked, “You OK?” I looked up at my gunner and asked the same question, but I didn’t get a response. I screamed it again. This time, I heard a blood-curdling moan. Blood was everywhere—pouring from his face, splattered down the turret. I remember the terror on his face as clearly as if it were just yesterday. That moment still haunts me.

Once I came home, once my mind wasn’t racing at 100 miles an hour, I had time to think and to detox from the military. And as I processed my memories, I wondered if something was wrong with me. In truth, my family and my wife knew before I did.

Before I deployed, I was very laid-back, an easygoing guy. I joked around a lot. When I returned from Iraq, I was edgy and short-tempered. The smallest thing could trigger an outburst. I viewed everything from a life-or-death perspective. I would get ticked off if my wife and I left five minutes late for an appointment. On a mission, “five minutes late” can get someone killed. You can’t be “five minutes late” to a firefight.

I couldn’t get out of The Zone.

In Iraq and Afghanistan, I was constantly telling soldiers what to do to stay alive. I did the same at home. In the evening, when my wife would tell me what she did or where she went that day, I might bark at her. “What the hell’s wrong with you? You could have gotten hurt.”

I couldn’t focus on any one particular task. I had to juggle several jobs at once to relax. That’s why I thrived in the chaos at my workplace, at a job I hated. I had trouble sticking to a conversation, and I had no patience. I couldn’t sit still for more than five or 10 minutes before I had to walk around the house. I couldn’t sit through a movie with my wife unless it was full of action. I played war-based video games to put me in my comfort zone. They soothed me.

I didn’t realize how bad I was until one hot summer afternoon almost three years ago. I was driving to work on I-880 when traffic slowed to a crawl. “Damn,” I thought, “another long day at work ahead of me and I’m stuck in traffic.” As I moved forward, I could see a car, then a motorcycle on its side. About 200 feet away was a body covered by a yellow California Highway Patrol rain jacket. In the next lane was the motorcyclist’s bloody helmet.

At that moment, I felt something different. I felt emotion for the first time in years. My eyes began to swell up, and tears streamed down my face. At first, I wondered what was wrong with me. But it felt good. It felt like I was breaking free from my turmoil, free from my private war.

Suddenly, there was clarity. I was able to step back and see what my family had seen for so long. I needed some help.

At my Vet Center, the staff told me what benefits I was eligible for and walked me through enrollment. They helped me with my job hunt. They gave me their personal phone numbers and told me to call if I needed anything.

And they got me the help I needed. A Vet Center counselor had me tested for traumatic brain injury and PTSD, and got me into group and individual therapy. It’s still a struggle, but I’m taking back control of my life and my feelings. Each day I’m one step closer.

It took me a long time to learn that asking for help is not a sign of weakness, but an act of courage. Post-traumatic stress doesn’t mean you’re crazy. It’s a natural reaction to trauma. With help, you learn to understand it and how to cope with it.

Over the years, I have wondered about the thousands of other combat veterans who are fighting their own private wars. Do they understand what’s going on? Do they know what services are available to them? Do they know how to win their wars?

And I’ve wondered, does American society understand what these veterans bring home with them? Sometimes I’ve wondered how much society cares. I’ve heard the jokes. I’ve heard co-workers whisper about another vet, “he’s crazy.” This guy put his life on the line for his country. Where is the respect?

Thousands of U.S. military personnel suffer from PTSD. They live in our cities, in our towns, in our homes. It’s our duty to pick up our brothers and sisters and help them through these hard times. As a nation, we sent them to war. Now we have to help them find peace at home.

The author deployed to Afghanistan from January to September 2002 and to Iraq from March 2003 to March 2004. He is now studying sociology at a college in Northern California, and plans to pursue a career assisting fellow vets.